Posted on September 24, 2013 by fieldsofseed

The small town of Parkside, about an hour North of Saskatoon, a flourishing business has taken over the local curling rink. Mumm’s Sprouting Seed started by growing large fields of alfalfa for seed. Today, they have an incredible variety of seeds available for sprouting. Although most of it is no longer grown on their farm. they try to source local seed, even though growing conditions for seed in Saskatchewan may not be ideal compared with other areas like the US.

Sprouting seeds are unique: many sprouting seeds are not grown on a large scale for seed, although they may be grown as vegetables. This presents some challenges. Seeding and harvesting equipment for these crops grown at a large scale are not abundant. Despite this, many of the crops can be seeded, swathed and combined like any other grain, they just require some adjustments to the equipment to make it work. Combines are amazing things. 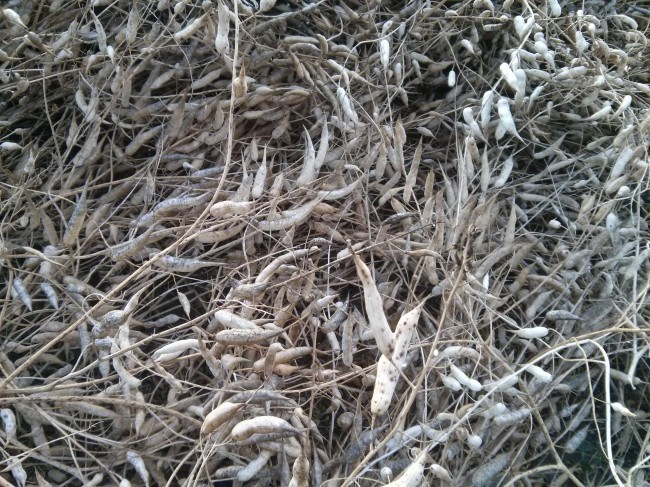 And there are no breeding programs for sprouting seeds, although with the increasing interest in sprouting, there has been more interest in selecting varieties that have traits particular to sprouts like colour and flavour, things that most plant breeders wouldn’t really consider when breeding a new variety. Why would a breeder care if for the first three days of a radish plant’s new life the shoot is red or green or blue for that matter? But these are things of interest to restaurateurs who garnish their prized dish with these tender tendrils.

Another important attribute for  sprouting seeds to have is that they must be almost perfect: disease free, free from stones or weed seeds and a high germination rate. This is a step beyond what most farmers look for to seed their fields, and this can make it difficult to find this kind of seed. Mumm’s sources high-quality seed and has it cleaned and tested themselves to ensure these high standards are met for their discerning customers. Being strong supporters of organic agriculture, they also source organic seed. 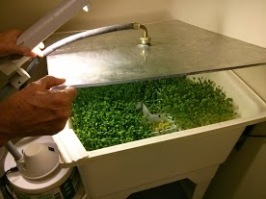 Growing seed for sprouting represents some unique challenges, but it also brings opportunities. For example, grain growers that are looking to diversify their crops have an alternate market, and an alternate crop to grow. This has particular benefits for organic farmers who practice crop rotations, and are looking for diversity in their fields. Crops that are grown as biennials, like alfalfa, provide numerous soil benefits, and can be harvested for seed for several years without having to re-sow.

As the health benefits of sprouts become more widely known and the popularity of these delicious greens grows, Mumm’s is increasing their warehouse facilities beyond the community curling rink. But there are other concerns on the rise. Most pressing is the threat of contamination from genetically modified crops. Already organic canola production is all but impossible in most of the Canadian prairies because of the amount of GM canola grown. Now there is a new threat: GM alfalfa. Alfalfa is an important crop for organic growers in this region. It is an important source of nitrogen, and it competes well against weeds. Fields that have grown this crop for a couple years are very fertile. And alfalfa seed is one of the biggest sellers for Mumm’s sprouts. If GM alfalfa is allowed to grow in Canada, organic alfalfa growers may be quickly out of business.

Fortunately for organic growers, LIsa Mumm, daughter of the founders of Mumm’s, is a staunch advocate for organic farming, and is on the front lines in opposing GM crops. Together with groups like Canadian Organic Growers, the National Farmer’s Union and the Canadian Biotechnology Action Network, Lisa and other organic farmers and eaters from across the country are working hard to stop the entry and spread of GM crops. More on this to come!